South Africans are a weird bunch. We have a penchant for the extreme, we only deal in absolutes like longest, furthest, highest. Any less and it isn’t worth the effort. That’s why a race like the Trans Baviaans exists, and has 1 500 riders aiming to ride 230 km, traversing the Baviaanskloof nature reserve. 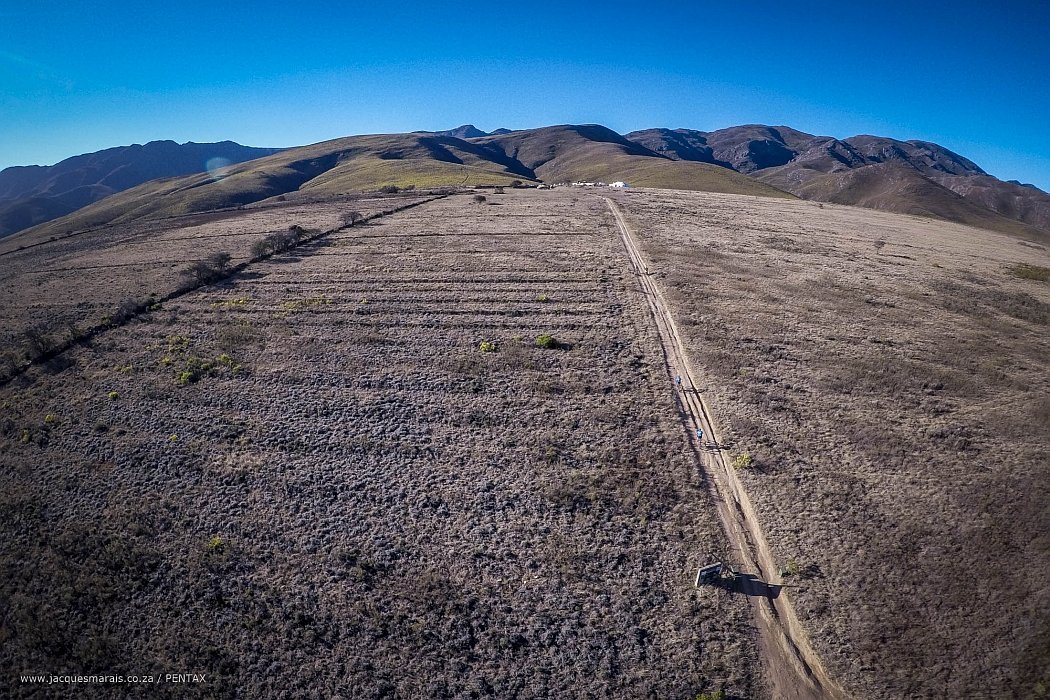 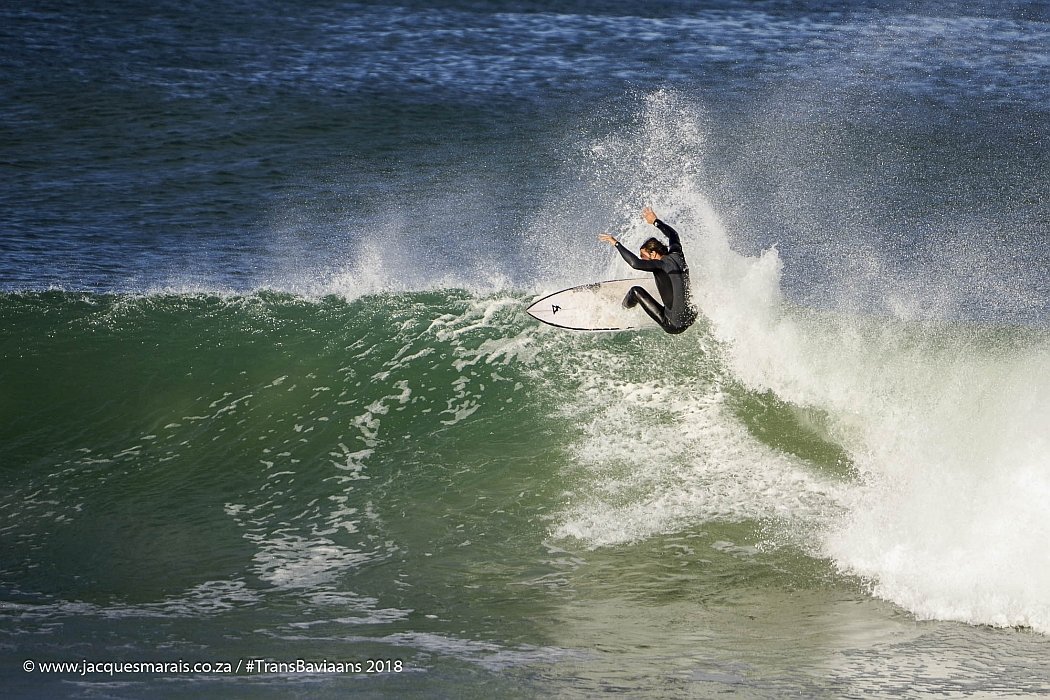 The Baviaanskloof is a world heritage site that spans two vastly different eco climates, you start in a dry, arid and vast expanse that seems almost Martian. You then finish 230 km later in one of the best surfing spots in the world, Jeffreys Bay, at the end of the garden route, lush and brimming with forest and nature. Each has its own appeal.

The race has a deadline, you need to complete the 230 km inside 24 hours, which is relatively easy considering that the pros this year, with a nice tailwind came in just under 8 hours.

I’ll be the first to admit, these ultra-endurance events are not my forte, 4 hours of hard racing is more to my taste and the thought of more than doubling that or even tripling that was giving me sleepless nights. My riding buddy had secured an entry for a team of 4 and given me fair warning that I had no option but to partake. We would be riding in the mixed category as his wife – a Cape Epic finisher – would be our X chromosome in the squad.

My previous foray into ultra endurance came a year earlier when my wife bought me a race entry into the half distance 36One. 180 km in April, in the sweltering heat of the Karoo, not too far from where the Baviaans begins. The first 90 km of that went well but I went out too hard and paid dearly during the second half. At the finish, my knees were aching and my butt was in tatters – 8h30 is a long time in the saddle. I also learnt from the resulting physio that the muscles around my knees weren’t strong enough yet to work for that long and had ‘given up’ which meant a bit of torn muscle on both knees and some time off the bike.

So I had some warranted doubts about the 230 km set out before me. Interestingly, the race starts at 10am, so even the quick riders spend at least a few hours in the dark, as the sun sets at around 18.30 in August. You have the choice to have your lights and batteries sent forward to a checkpoint so you don’t have to carry the extra weight, but run the risk of a problem possibly meaning you don’t get to them before sunset. Choices… 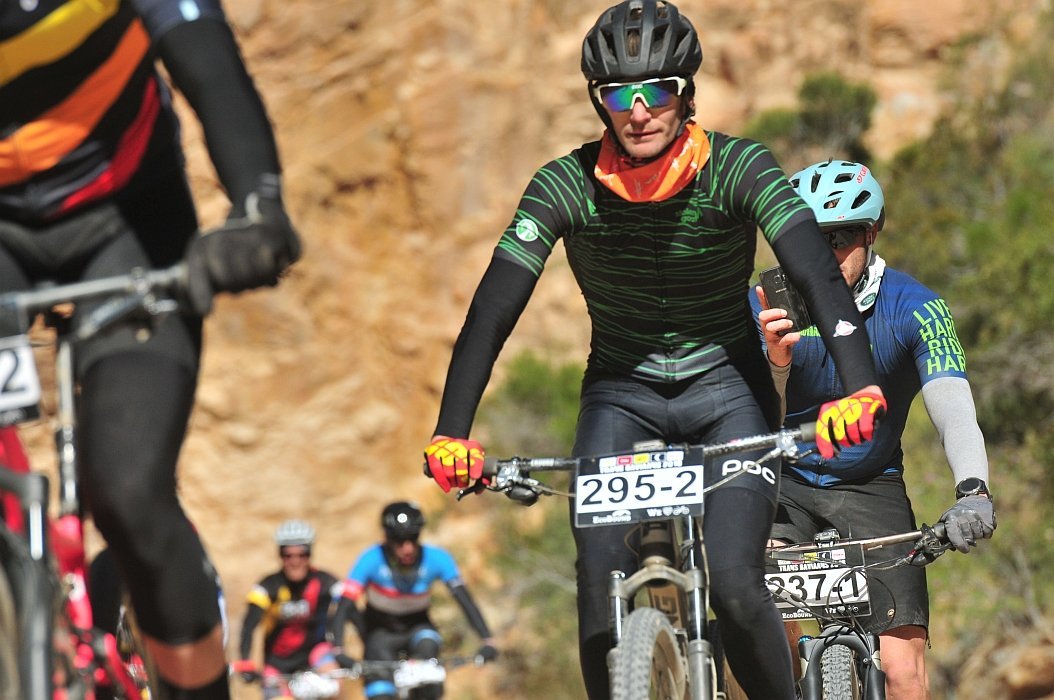 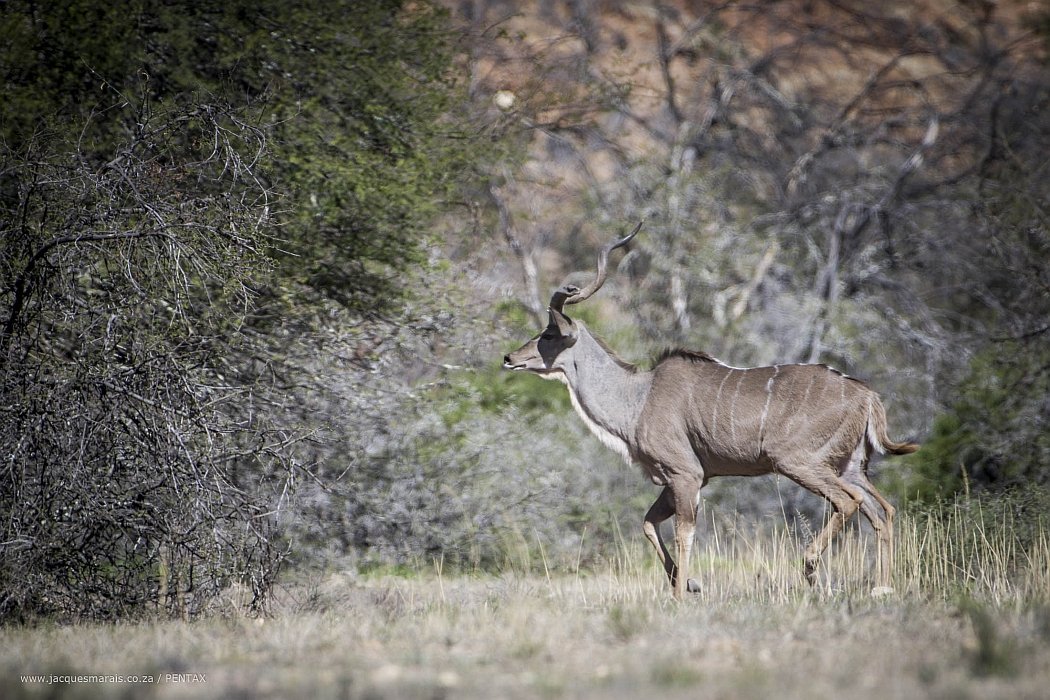 Crikey it was cold. Minus 3degC at 7am, we hardly ever get temperatures below zero here, so the shock was real, but the skies were crisp blue and predictions were for a high of 18degC. Temperatures change when you’re traversing mountains though, so I decided it was a leg warmers and arm warmers kind of day with a scrunchy waterproof in my pocket just in case things got interesting. The leg warmers were a mistake, within an hour of the start my legs were overheating.

As a team of 4, you want to ride in formation, creating a group of your own or latching on to a group of a decent pace. We struggled at the beginning to find gaps for 4 riders to get through the bunch, especially as the first 30 mins was a 2-lane Jeep track.

Eventually, things widened out on a district dirt road and all together, we set about moving onto a group and getting through the first few hours expending as little energy as possible.
That district road turned into a torture chamber, the corrugations and bumps pummeled constantly for 115 km. We zigged and zagged, trying to find a smooth path but for the most part were constantly jostled about, holding onto the bars tightly while pressing on at 30 kph. It was pretty difficult to eat too, I remember pulling out some date balls with the intention of eating them but a consecutive set of bumps tossed all 3 from the packet, into my face and then onto the floor. None in my mouth… 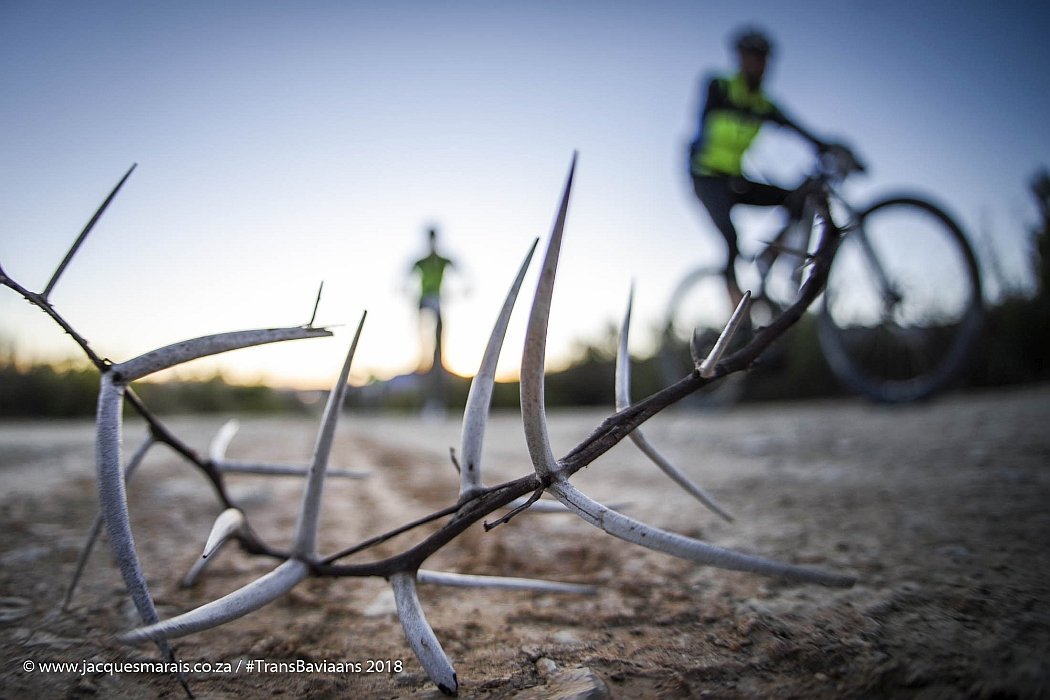 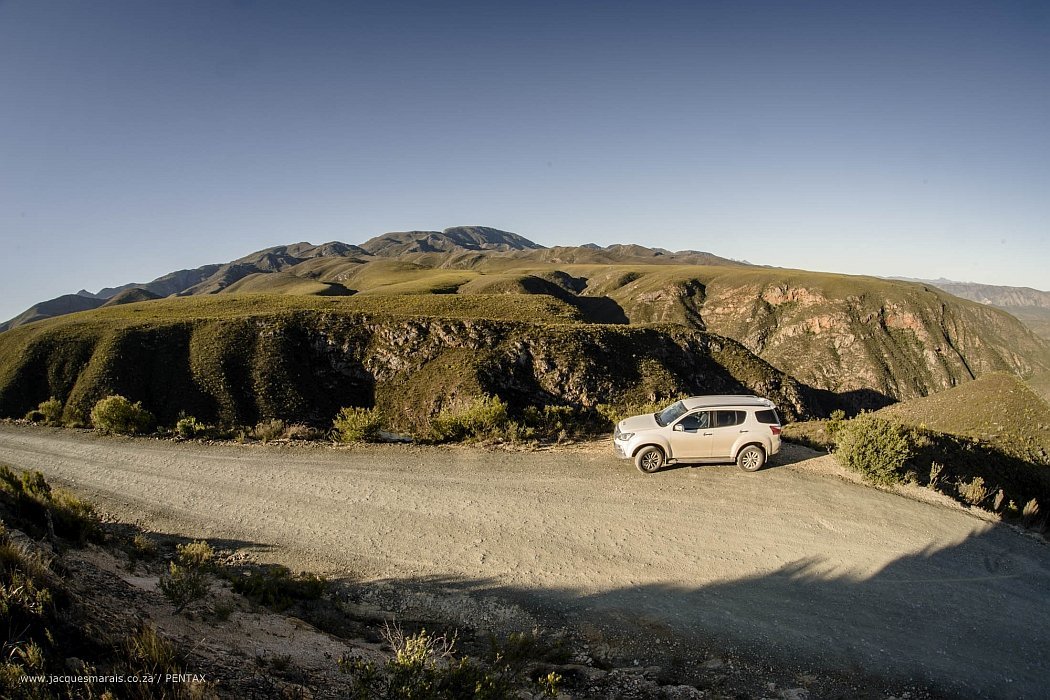 After 115 km we got to a checkpoint, where I dropped the leggings, ate some food and filled up my water bottles. We then rode in a dry, rocky riverbed at a much slower speed but the scenery changed dramatically. The mountains began to turn a shade of green, trees had more than just huge thorns on them and we even past the odd baboon and zebra. This small change seemed to breathe a bit of life into our squad and we began to chirp and talk again.
This was also when the climbing started, the climbs have become legends in their own right with names like Baviaans Back, the Fangs and Mac (mother of all climbs). Gradients go into the 20% plus range on the Fangs, they’re steep but quite short where Mac sets you back anywhere between 45 mins and 1h30 depending how you play it. 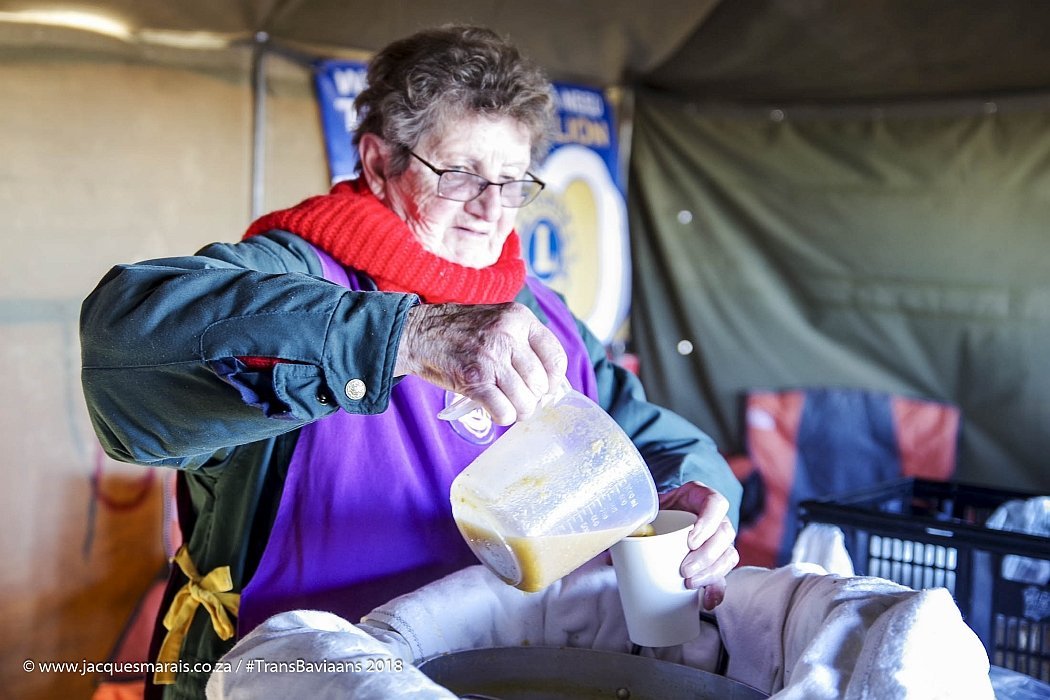 The top of Mac signals the 130 km mark – only 100 km to go. The stop is famous for the soup they serve and the 360-degree views of untouched nature. Geologists say that these mountains used to be taller than the Himalayas but now sit at no more than half the size they once were. 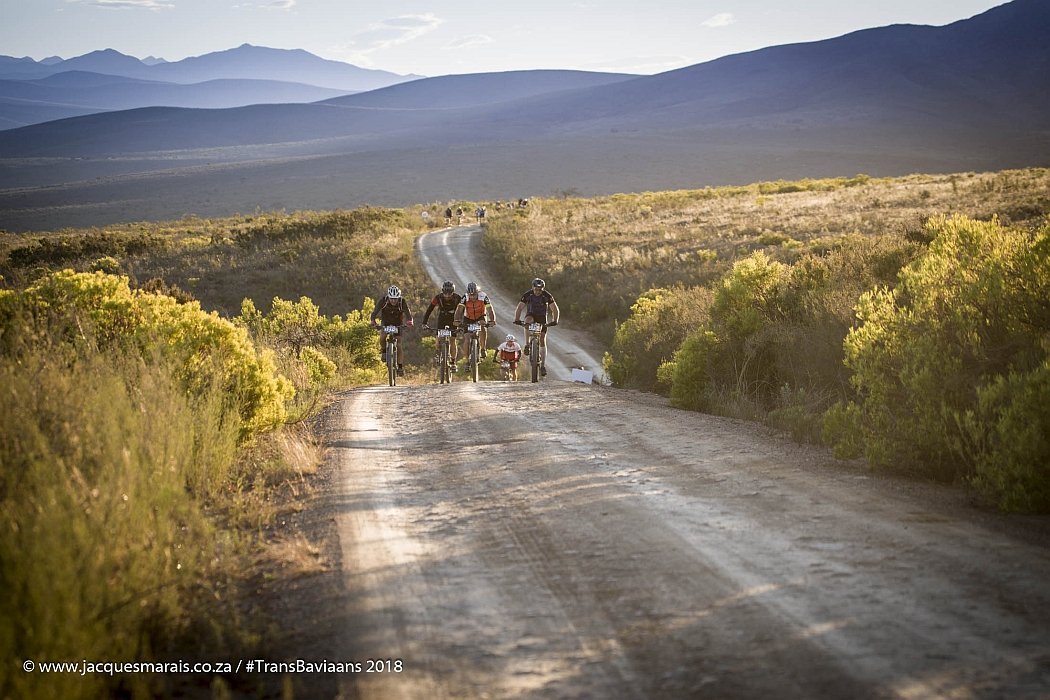 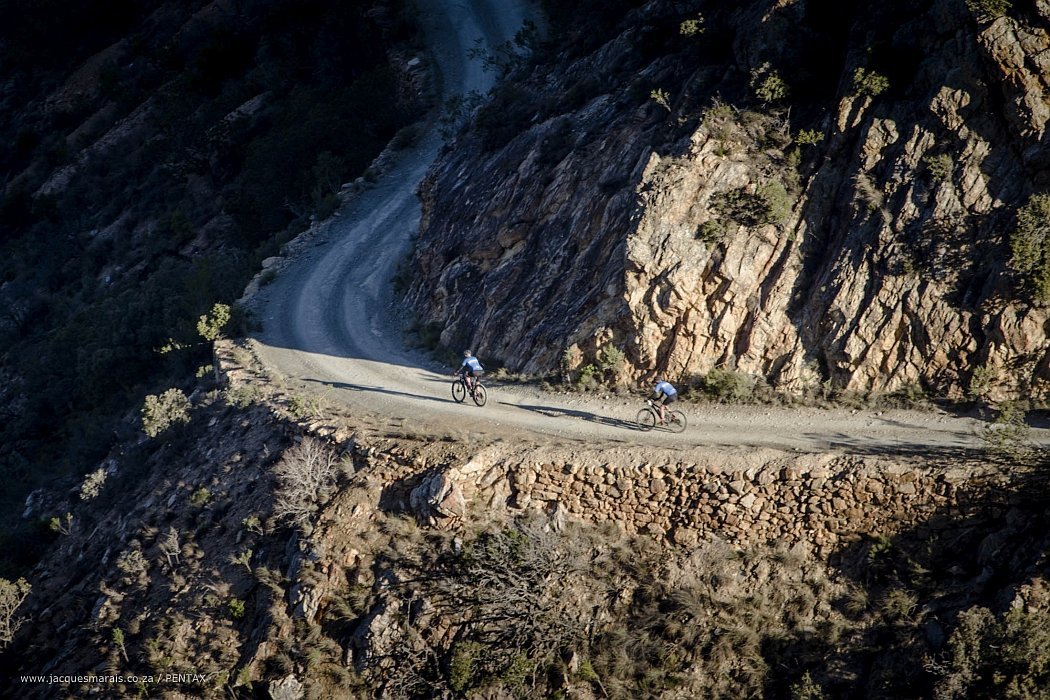 This stop is where the lights go on and if you’re timing is good, you get to do the descent with the setting sun. This area is so free of human interference, the air is crisp and clean and the sky is spectacular. As night falls, the stars come out and with no town within 100 km, the stars and milky way show off like no city dweller will ever believe.

All 4 of us had ups and downs, hours or minutes where you feel awful, sick or just over it. They pass and as long as you’ve fueled your body consistently, the legs or stomach come right. 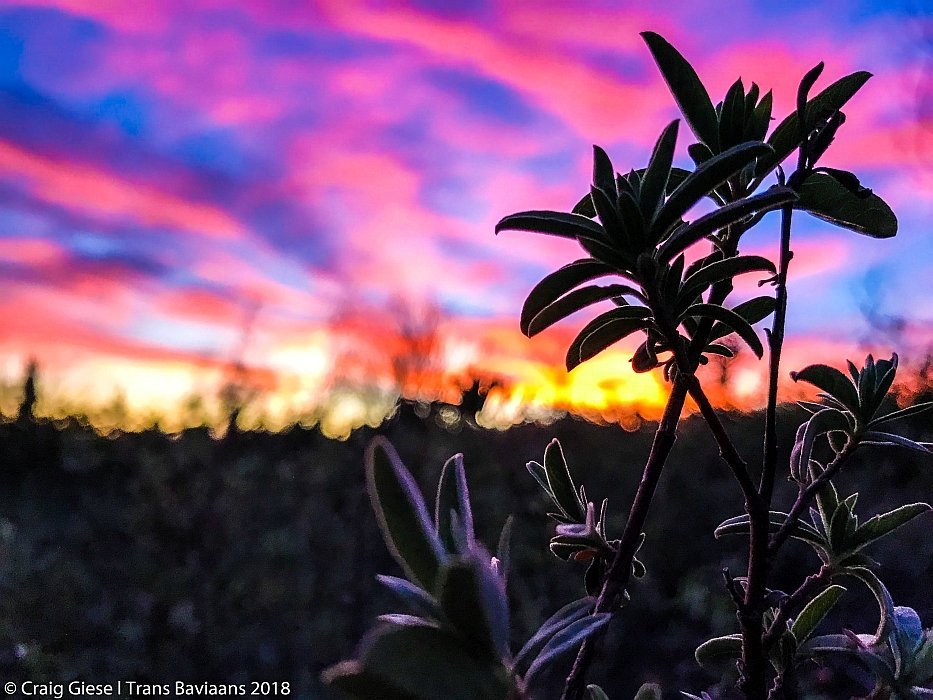 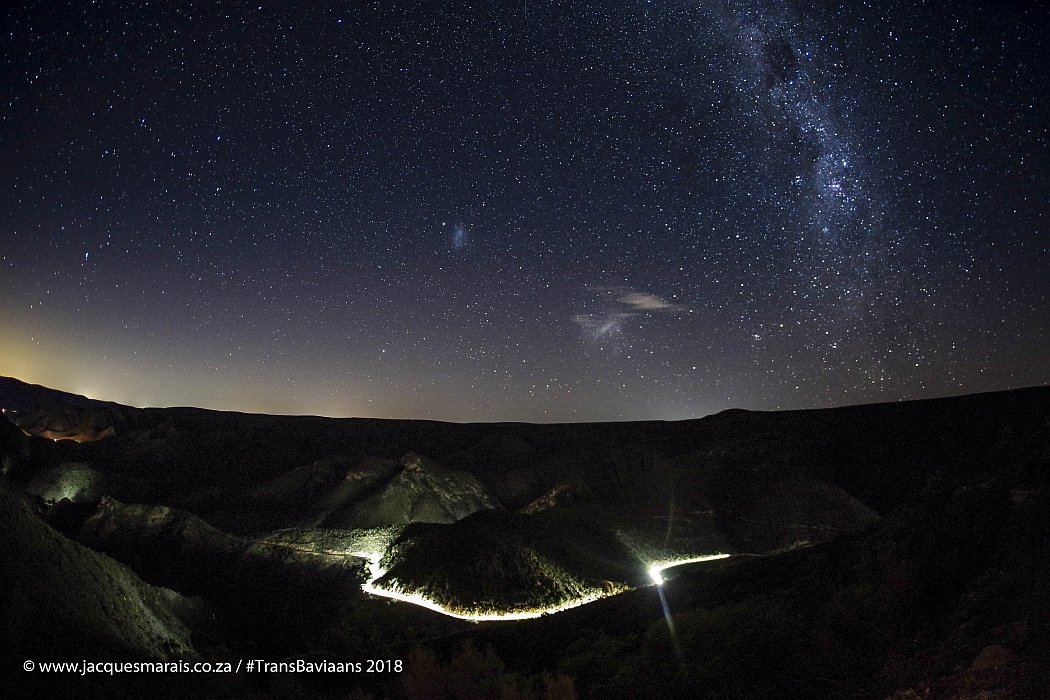 Darkness is different for everyone, some get tense and without being able to see your surroundings, clock watch, which really makes the k’s tick by slowly. I love the dark, the cooler temperatures suit me and my legs came to life more than my teammates. The last 50 km mixes a few long-drag climbs and quick descents before the lights of Jeffreys Bay lurk on the horizon.

5 km from the end, the only section of singletrack in the whole race arrives, you ride adjacent to a railway line with the lights of the town on your left and the pitch-black mountains and nothingness of the Baviaanskloof on your right.
We crossed the line in 11h19, sore but happy to have finished. During the race I swore I would never do this to myself ever again, cursing the corrugations and nursing the worst saddle sores of all time.

One day later I was on the website looking for entries and planning a team to go under 10 hrs. Something is wrong with me, terminally.