This month we’ve been getting acquainted with Central Asia: A completely new part of the world to us. So buckle up for the ride, here’s what went down…

They say patience is a virtue and we put this to the test during the first part of our Central Asian adventure. We spent four days waiting for a boat to take us from Alat in Azerbaijan across the Caspian Sea. To be clear, there’s no timetable, and you, along with seemingly everyone who works at the port has no idea when an available boat will come to take you on the next leg of your journey. Another catch: To ensure you don’t miss the boat you’re strongly advised to stay on the hard concrete of the port until transport can be arranged. The upside is there’s plenty of other cyclists in the same boat (pun intended), so we formed a very much stationary peloton camped out at port. It gave us the perfect opportunity to make some music, somehow using an army of lorries and swirling dust as inspiration.

After four days, our boat came in – the Mercury 1 – an old cargo ship full of train carriages – and now intrepid cyclists. Climbing on board in the twilight hours, we bunkered down for the night hearing the engines clunk into life hoping to wake in the morning ever closer to Central Asia. However, peering out of the cabin window the next day we noticed we weren’t moving. We could see land, but it wasn’t Kazakhstan. it was still Azerbaijan – we had hardly moved. This was to be the start of our next instalment of waiting – two days worth to be precise as strong winds in the middle of the Caspian Sea halted us in our tracks. What could we possibly do with all this time? Play an impromptu gig on the top deck for the crew of course. We’re not sure that ambient synth wave is their favourite kind of music but by the end, they were converted.

Three days after we left port, we eventually reached the sandy desert shores of Kazakhstan. We left the port in good company, Our group of two had swelled to seven. Six Englishmen and one Scot, dubbed the ‘Mercury 7’ set off into the desert in the height of summer – what could possibly go wrong…

Within hours of setting off, the blazing desert heat had us in its hot grasp. We quickly realised that the middle of the day was a no-cycle zone. The temperature skyrockets to the mid-40s and apart from the odd storm drain or tunnel ( usually full of horse or camel excrement) there is no shade. The route was so remote that hopes of finding water lay solely on teahouses spread as far as 70km apart. Without doubt these were the harshest conditions we had faced. We quickly realised that if you don’t respect the desert it will come for you. It wasn’t all bad, pre-sunrise mornings are always a sight to behold and bunkering down for the night in deathly silence is a new experience when set against the din of living in London that we’re used to.

No sooner had we found a Kazakh rhythm, we had reached the border of Uzbekistan. It was at this point, the Mercuri 7 dispersed. We continued with Jade and Jim, a couple from Leeds,  and decided to get a little assistance from a train to cover some miles and bring us closer to the prestigious Pamir mountains of Tajikistan before the weather turned frigid on the peaks.

We disembarked the train to pedal our way through the jewels in Uzbekistan’s crown – Bukhara and Samarkand – both bustling with mosaic ladened temples and historical sites of incredible beauty. In Samarkand, we felt it only fitting to perform our very own cover of Darude’s 90’s dance banger ‘Sandstorm’ as a tribute to our time in the desert to a group of intrigued locals.

Once we left Samarkand, we began to close on the border of Tajikistan – somewhere that was high on the list of places we were looking forward to visiting when we were planning the adventure all those months ago. The news of the tragic deaths of fellow cycle tourists in the country had filtered through weeks earlier but we were not to be deterred. The actions of a few do not represent those of many – the people of Tajikistan have a reputation of being some of the kindest and welcoming on the cycle touring circuit, so we were looking forward to getting acquainted.

As soon as we crossed the border, the landscape changed dramatically. Imperious mountains loomed over us, a stark contrast to the flat and seemingly never-ending deserts behind us. The road to Dushanbe, the Tjiki capital, carved its way through valley after valley, hugging the river as it went – it looked more like a film set than real life. Before we reached our goal we had one obstacle to overcome first – the daunting so-called ‘tunnel of death’ – a 5km stretch in near pitch black darkness filled with the fumes of commuting lorries as well as thick coal dust. We reached the tunnel’s mouth, flagged down passing a truck driver, loaded four bikes into the back of his truck and squeezed into the cab. The tunnel was as deathly as we had been told. We couldn’t see a thing and we could smell the fumes seeping in through the windows of the truck. We jumped out the other side and cycled down from near on 3,000m to Dushanbe. It was time to stock up and prepare for the Pamir Highway – finally, it was in our sights…

See below for photos and a video. 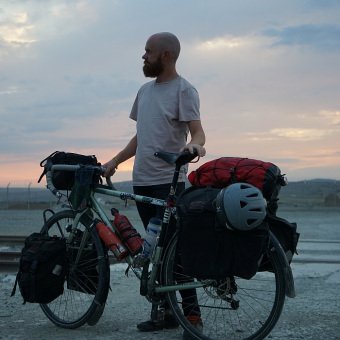 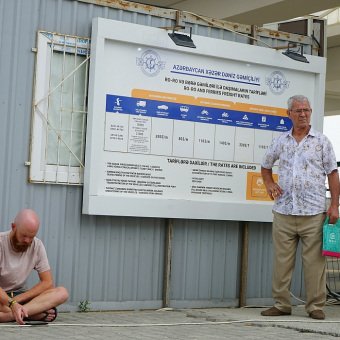 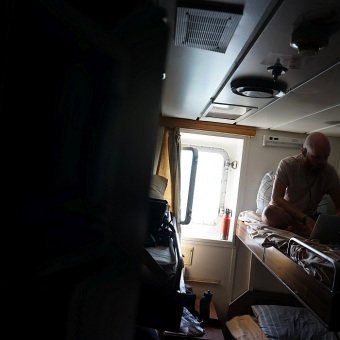 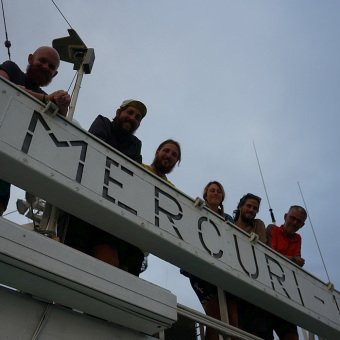 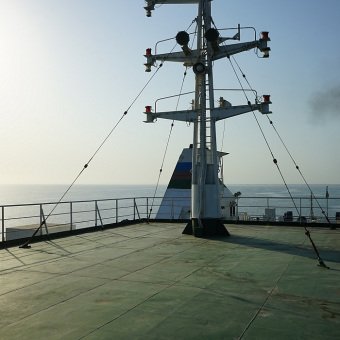 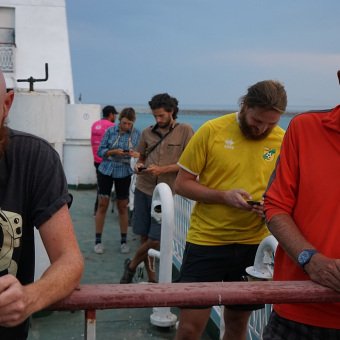 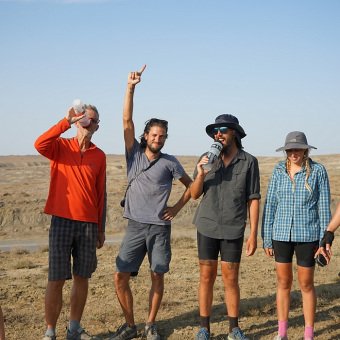 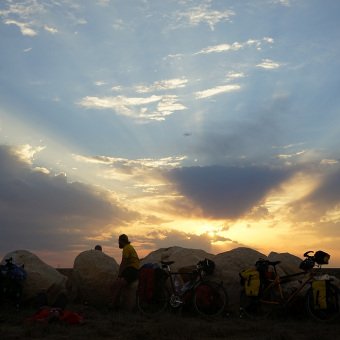 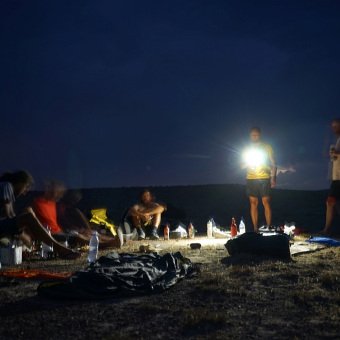 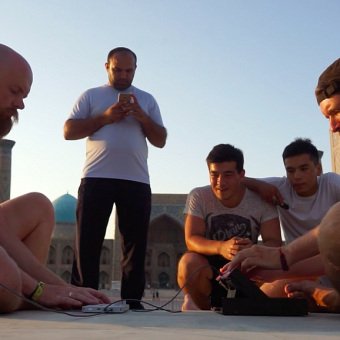 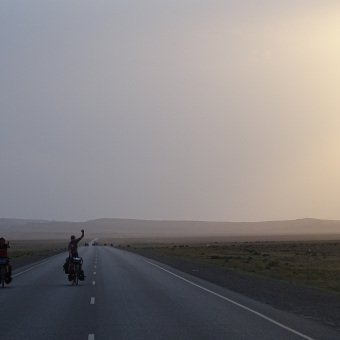 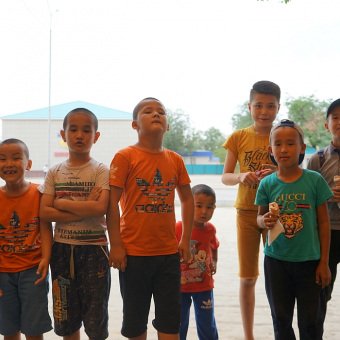 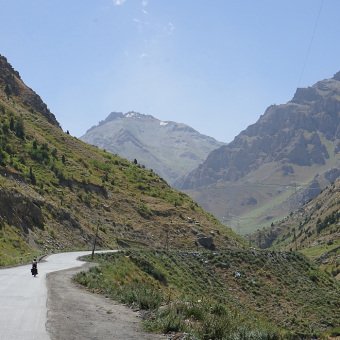 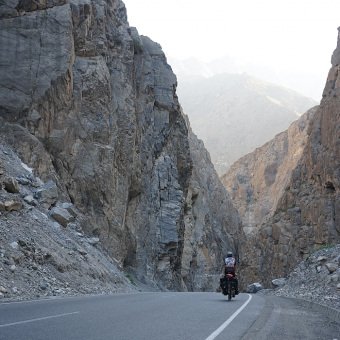 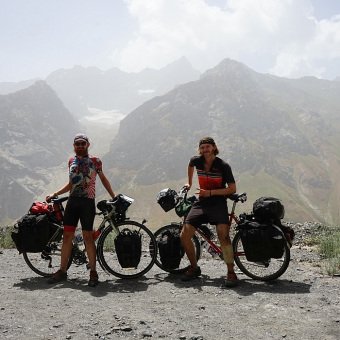 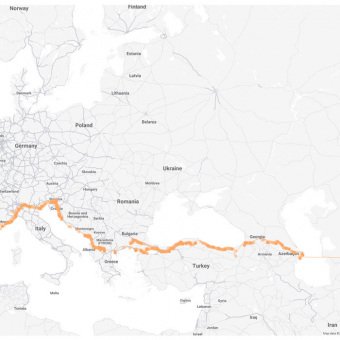 Goats are able to consume 3 to 5% of their body weight in dry matter. – I won one of those eating competitions once