Hi, I’m Jenny! I’m a swim-bike-run obsessive (and a fig roll enthusiast), so when I’m not cruising around on my bike I can be found hopping into lakes or out for a shuffle. My childhood and teenage years were mainly spent in a dance studio, so when it came to cycling I was already onboard with the snazzy lycra aspect of the sport – but it’s safe to say the road that lead to my love affair with life on two wheels was bumpy and riddled with potholes.

I was on support crew duties for my other half at Ironman UK in 2015 when I decided I wanted to join this pack of lycra-clad loonies and have a go at this triathlon malarkey. There’s something special about watching an Ironman because you’ll see such a diverse range of people, all taking on the same challenge and overcoming countless hurdles to make it to that finish line. It’s incredibly inspiring and I wanted in. I’d joined my local running club the previous year and I’ve always been a water baby, but cycling was something I’d abandoned as soon as I was old enough to say no to my Dad’s suggestions of a “long explore”. Cycling was a necessary evil I would have to get re-acquainted with if I wanted to take up triathlon.

I got on a road bike for the first time in March 2016, wearing a pair of my boyfriend’s old cycling shorts, some questionable leggings and an expression of sheer terror. I’d spent the previous summer rolling around tentatively on my old mountain bike, a heavy beast of a thing that was not dissimilar to an armchair on wheels. Getting on a road bike felt like a whole new and terrifying ball game. 30 white-knuckled, wobbly minutes of riding later and I’d just about survived. Thankfully, I’m a stubborn little beast and I was determined that I was going to master this cycling thing. My catchphrase may or may not have become “I f-ing hate cycling” and I spent a significant amount of time having an unplanned lie down on the side of the road with my bike as a duvet, but slowly my cycling improved. I also discovered that one of the major perks of cycling – other than the coffee stops – was the outfits. I ditched my boyfriend’s hand-me-downs and treated myself to a sassy new Stolen Goat jersey, which is still going strong hundreds of miles and hours of sweaty turbo sessions later, and became the first in a growing collection. 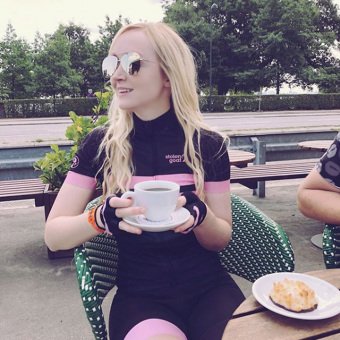 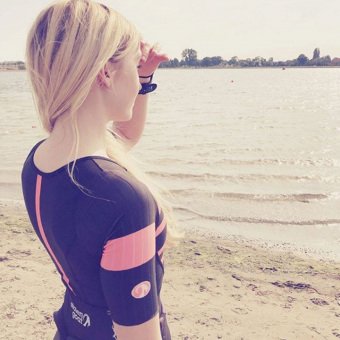 Over the summer of 2016, I made it through my first few sprint triathlons incident free and I even won my age category at my first open water sprint! Mainly because there was only one other girl racing in my category that day – but it lit this little fire in my belly. I wanted to push harder, to go further. I was ready for a big adventure. It was time to ditch the metaphorical stabilisers and play with the big kids. At the end of 2016, I entered Ironman 70.3 Zell am See 2017. A 1.2 mile swim, a 56 mile bike (with a long, steep climb and a technical descent), a 13.1 mile run. I contacted my boyfriend’s coach, Campbell Noon, and tasked him with getting me to that start line. 9 months of hard work, determination and a make or break Mallorca training camp later, I was ready. And cycling had become my favourite triathlon discipline. I made my way up the long climb in Zell am See with the local’s cries of “hup, hup, hup!” ringing in my ears and a huge smile on my face. I’d fallen in love with cycling. Less than 24hrs after completing my first half Ironman, I signed up for Ironman Copenhagen 2018 – a 2.4 mile swim, 112 mile bike and a marathon.

Fast forward a few months and the girl that supposedly hated cycling was happily handing over the contents of her savings account in return for a stealthy-looking Canyon Speedmax TT bike. I’ve spent the last 8 months training harder than ever – averaging between 16 and 20 hours a week. From the 5hr turbo sessions (thanks for that, Beast from the East) to the long solo rides in the great outdoors, putting my abysmal sense of direction to the test – I’ve loved every second. Testing my limits, seeing the progress and feeling my body getting stronger by the day has been an awesome journey. I raced Ironman Copenhagen last week and I had so much fun on the bike section I was kind of tempted to go off and do another loop. Given that I’m still so new to triathlon, I’d set myself what felt like a lofty goal of finishing in under 13 hours. 12 hours 33 minutes after I started, I crossed that finish line with those 4 magical words I’d been waiting for finally being called out: ‘You are an Ironman!”

I’ve made more progress than I ever thought was possible over the last 2 years and I’m looking forward to pushing on and seeing how far I can go. Triathlon kind of makes you feel like you can take on the world. I’m so excited to be joining the herd at Stolen Goat – that first jersey purchase back in 2016 marked a key moment where I finally discovered the joy of cycling, and I’ve been a big Goat fan ever since. As I type its one-week post-Ironman, my quads are no longer on strike and my sights are firmly set on the next adventure. The transition to full-blown triathlon addict is complete.

Goats do not have tear ducts. – But my tears of joy are real