Chronology of a 13kg weight gain (and loss?):

I finally came back to Belgium after a one-month bikepacking trip in Italy. 70 kg and well-trained after riding middle to long distances almost every day. A few months before leaving Belgium, I had heard about the Transcontinental Race, and my Italian trip confirmed that I wanted to participate in a race like this for summer 2017.

June was also the month I finally met the woman of my dreams and, except for a few lucky ones, it often means taking distance with cycling… You know how it goes…

So while I was falling in love, something else was rising… my weight! Less rides and same diet = + 4 kg. So far, nothing too bad, I just went up from 70 to 74kg…

Autumn 2016 kept a special gift for me: the necessity of surgery… In mid-November, my surgeon told me: “no worries, it’s a simple surgery, you’ll be back on your bike within a week!”. Well, alright then! Appointment took for a month later (15th of December), but cycling forbidden in between. By the time I went under the knife, I had already ballooned to 78 kg!

Finally, the operation arrived: you remember what the surgeon told me, one week off and then up on the bike again? -> Reality: one whole week completely bedridden, the 2 following weeks I could just dare to walk from my bed to the sofa… Result? 82kg!! Hooray! My boobs had come back as well as what I called my “J-Lo”: didn’t know my butt could grow this much.

I long for my bike during a month, sometimes playing with it in the living room, changing gears just for the sound of it, grasping the handlebar for the feel while imagining myself tucked on the drops on a beautiful Italian descent…

Fetishist, me? Let anyone who is free of sin throw the first wheelset (an expensive one if possible)

Quite oddly, my weight kept going up until mid-February although I tried to train whenever possible…

Want one very bad fitness advice? Do you see this big drop between March and April? No special training or diet: just plain, beautiful and severe gastroenteritis… Lost 4kg (beware the paellas!!)

But it felt like 2017 was still angry with me as I tried to recover my pre-surgery “fitness” during March: as soon as I exceeded 60km on a bike ride, I had mild to severe pain in my right knee cap the day after… So, training was about one little ride per week! Morale was very low, losing most of my time not focusing on/preparing the race I was training for but instead on trying to understand the reasons of this pain (I can’t count the hours spent watching videos and reading articles about bike fitting. But at least now I’m known as the “bike fitter friend that can do it for free”…). I spent several hundreds of euros seeing sports doctors, each time with the same advice: “nothing too wrong with your knee, why not change the orientation of your cleats?”. SERIOUSLY??! I rather had paid a cycling club membership for the next 20 years, I would have had better advices… Finally, after the last one, desperate as I was, I ended up getting a bike fit…

So i did in mid-April… And guess what: the “patented” saddle height formula “inseam x 0,885” (or the “pedal with your heel without your pelvis rocking” rule) was what was killing my knee: my saddle was 2 cm too low…(and my right leg is a bit shorter too). So three things saved my rides: new orthopaedic insoles, 2 cm increased saddle height and a 3mm wedge under my right cleat (by the way, the orientation of my cleats were perfect; thanks doctors…).

The bike fit was worth it for me, but it’s not magical: I still have to go back to the center to fine-tune my position as I still occasionally experience some knee pain… 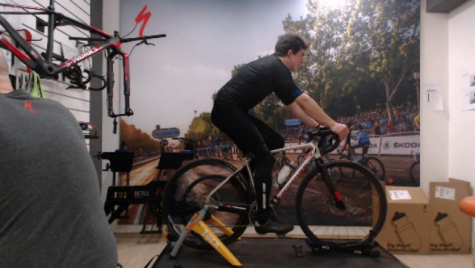 If you ever need a bike fit due to chronic injuries, be patient, it took me 3 to 4 weeks for my body to adapt and really see the benefits. There are plenty of different bike fit types: I chose the Retül with motion capture (so you can see if your hips, knees and ankles are aligned while pedaling, which was what was obsessing me). But as a friend of mine told me (he’ll recognize himself): what matters fundamentally is the bike fitter’s experience and his attention to your injuries and expectations. Mine was ok, but it felt a bit like he was just reading his computer… So, choose experience over technology.

So, as I needed time to adapt myself to my new bike’s setup, it’s only since mid-May that I can train on longer rides! According to my training agenda, I should have been completely ok with 300+k rides with lots of elevation since February. As of today (mid-June), I’m just confident on 200k rides and only one month left to train before the NorthCape4000 race starts!!

My plan for training? Actually, I don’t have one as I only ride for fun. Of course, I could train ten times as hard, wake up every morning at 5 to ride a bit before work, go to the gym for special exercises, and so on. But I don’t see the point as I don’t have any other ambition in cycling than riding for the fun of it. It’s true that I tried to stick to a training plan, but I really hate the discipline it asks so I came back to the old fashioned way: ride whenever you feel like it. That would be my only advice. And if you can improve your riding while “playing”, then it’s great! 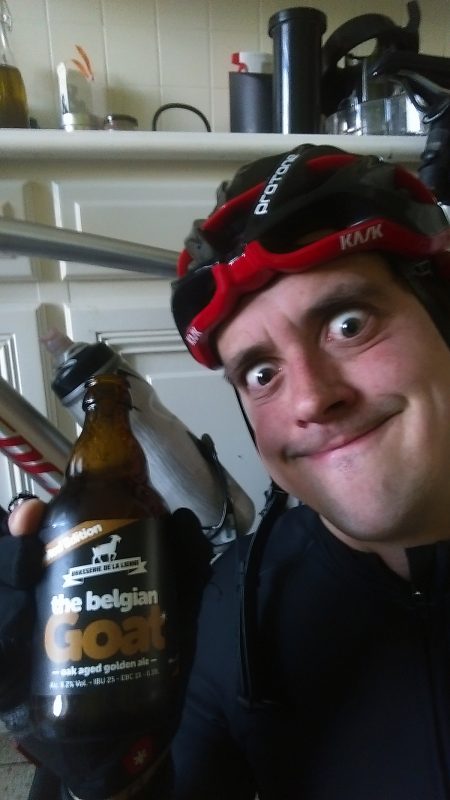 The attentive reader will have noticed that this article is full of contradictions… Hating competition but entering a race? Having a goal but not the means to achieve it? Why not just cycling around the block forever instead: it’s cheaper, and, following this article logic, would have the same benefits.

Honestly, I don’t have any relevant answer. All you could retain from this article is: try to resolve the paradox of riding for fun and pushing your limits… Maybe that’s what #adventuremore is all about…

Healthy kids can stand within minutes after birth and are able to move with the herd almost immediately. – Catch up humans