Of all the races I have both taken part in or volunteered in, I have never seen an event so seamlessly executed. Chester Triathlon Club truly out did themselves with their organisation, the goody bags and rounding up a stellar amount of support from the locals.

I knew this race would exceed expectation as it is one of the iTU qualifying races, which also meant that the competition was tough (to say the least!) – but what’s a race without a little push eh?

The city of Chester is beautiful, around the River Dee there are so many pubs and restaurants to chill out in the day before the race, and of course enough to make sure you got those post-race pints in! We arrived on the Saturday when registration was open until 5pm, and you could also join in on a course recce as well which was useful. For those of us who weren’t keen on doing the whole course profile, there was a video of the bike course playing on loop in the registration tent which was just as useful to know what to expect the next day. Everything was covered in terms of athlete preparation including a goody bag with a High5 water bottle, High5 gels, energy and protein sachets, sunscreen, and t-shirt.

Once registered we grabbed a cheeky ice cream and headed to our hotel before meeting our fellow racers from LFTC for a pre-race dinner. Normally I don’t drink before a race, but as I wasn’t racing to qualify and it was a lovely, sunny evening, I couldn’t resist a half pint in the pub…#livingdangerously.

Our early wake up the next morning to get to transition and set up our bits was met with glorious sunshine which is always a bit of a relief on race day. A quick bike rack and a wiggle into the wetsuits later and we were already heading down to the start line.

The water was a whopping 19 degrees and with the sun beating down on us the swim was roasting! An out and back loop let us take advantage of the downstream current which was much appreciated by all the swimmers, however they took no mercy in sending us uphill and up a flight of stairs in T1…so you know, it evened out. I also had a bit of a nightmare getting my goggles half kicked off my face right…these things happen though and the best thing you can do is just keep going and control what you can! 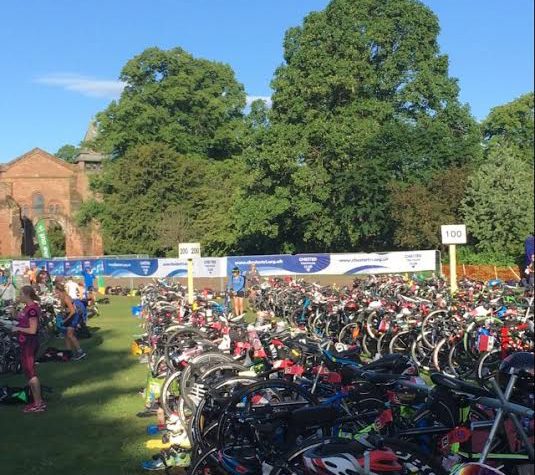 A flat and fast course meant that this race was ideal for those chasing a PB, especially on the bike as after 20km, you are on the freeway for 18km and able to reach some knock out speeds on the aero bars. There were marshals at every turn so there was no chance of getting the route wrong and even a few supporters in the furthest parts of the course.

T2 was speedy as usual (apart from me, as I desperately needed the loo…another minute hit on my time – let’s be honest, no one likes running in that condition!) and everyone was also discussing later how cold they were coming off the bike; I definitely couldn’t feel my feet so putting on my trainers was perhaps not as smooth as it couldn’t have been.

The run course was three laps of the park, so a mixture of road and off-road terrain which broke up the kms and made the three laps seem less repetitive. Over a bridge, into a meadow, down one side of the river bank, over another bridge and up the opposite bank with a straight of cheering supporters all looking over the runners from the pubs. It was great, more than enough to get the adrenaline pumping for the next lap!

The finishing straight was a blue carpet of applause and an enthusiastic MC shouting out the names of all the finishers. Jaffa cakes, Bananas, Haribo and Coke at the ready to replenish those glycogen stores, and then medals and towels a little further down – they clearly knew the priorities.
For our little group, we were desperate for some post-race beers and food so we were thrilled to hear that transition would be kept open for a few hours and we wouldn’t have to take our bikes with us. Just like that, it was all over!

I know it’s sometimes useful to see a little more detail in the breakdown of the day, so this is what I did in terms of my own race prep:

Saturday
3.00pm – arrive in Chester
3.30pm – register and grab goody back + cheeky ice cream
4.30pm – settle at hotel, prep clothes etc. for the race
6.00pm – walk down to the canal to meet our fellow LFTC racers and have some grub. This consisted of a mix of pizza’s, salads and garlic bread. We all couldn’t resist a pudding either…
10.00pm – a pint of water and bed!

Sunday
6.00am – wake up, get ready, have breakfast. I had my usual race day meal, porridge + banana and peanut butter
7.00am – Transition set up and wetsuit wiggling. This was also the start of the Middle distance waves
8.00am – Race start!

Nutrition
Dinner pre-race – chicken salad with pitta bread and hummus. Chocolate and hazelnut cake for dessert. Half pint of beer and a pint of water.
Breakfast – porridge + banana and peanut butter
Race – 1000ml mix of Lucozade sport orange & water, taken on the bike. Trek Oat & Banana flapjack split into three, eaten every 20mins on the bike. Energy gel in T2 before the run.

Overall, all of us were really happy with our results! My swim was pretty atrocious and there isn’t anything I can do about that but come back stronger next time. I was so happy with my run and looking back I wish I pushed a little harder on the bike, but like all races you have things that you celebrate and things that you take away and learn from for the next one. At the end of the day it’s all about enjoying it and finding a happy medium between having fun and also making your training worth it. I have to say a huge thank you to Chester Triathlon Club for putting on an outstanding race, can’t wait to come back next year!

Want to get triathlon ready? Make sure you’re training with stolen goat kit, ride any weather all-day, every day, in style and in comfort!

Thanks for reading – stay tuned for more!

More from the Blog