I was never really ‘sporty’ when I was younger apart from swimming. It was the one thing that I adored as a child, being in the water. My Mum will tell me her horror stories of when I’d swim out to the deep end of the pool, get rid of my floats and sink all the way to the bottom as I could hold my breath for a really long time. I continued swimming all the way until high school where I did a brief stint for county but gave up as the competition was so fierce and sadly I lost my passion for it. At school, I trudged through PE lessons and just about survived the cross country races each year but I was always back of the pack, I hated running. When I left my fitness plummeted completely; I moved to the city and it became a venti Starbucks latte and two muffins for breakfast, standing on escalators and sitting all day. I think the most I would exert myself was when I was late for the bus which is what triggered my decision to get active again. 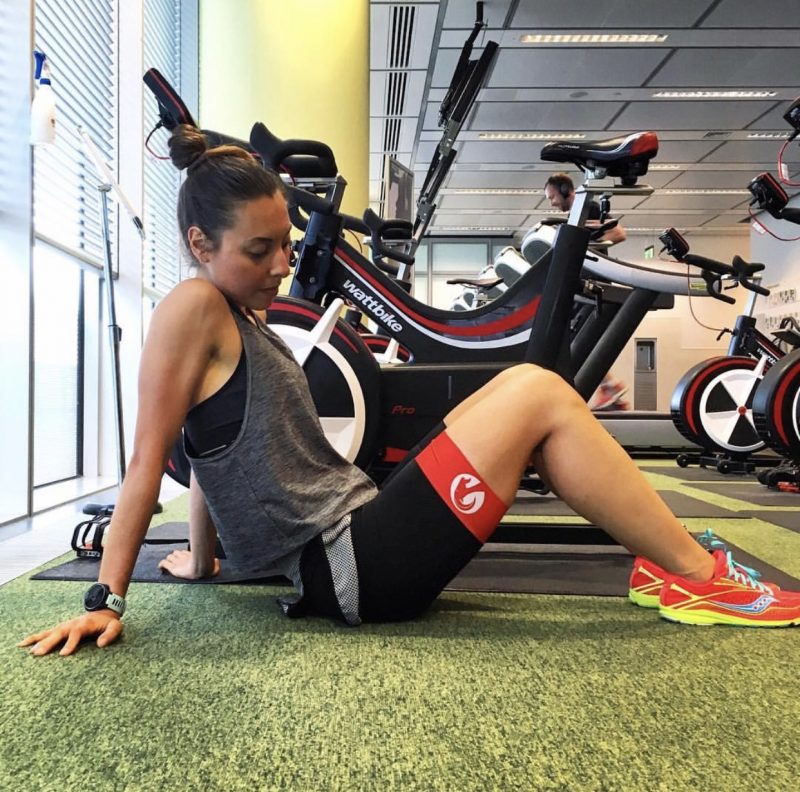 Five years ago I joined a gym and started doing classes which was where I found the most motivation. I discovered the joys of spinning and before I knew it I was there every other day, sometimes twice a day! My brother had also introduced me to climbing at this point, which I’d done when I was younger back in Asia, and I fell in love with that pretty quickly. I became willing to try anything and about a year later I decided it was time to try running again #sohelpmegod.

I remember my first run. It was hideous. I was out of breath after five minutes and all I wanted to do was stop but I stuck at it and each one became easier and easier and I became faster and faster and after a couple of months, I was in love. I ran everywhere, to work, from work, before work, after work – anywhere I could squeeze it in. Then in 2014 I entered my first half marathon and managed to lay down a newbie time of 1:48hrs which only encouraged me to keep striving.

It was when I met my other half in 2015 that triathlon came into my life. He was part of a local tri club and I went along to a couple of races to watch him compete and was totally inspired. I have a very short attention span, so finding a sport that had enough variation that things would never get boring was a real page turner for me. I thought that it might be too much at first (they all looked like machines!) and so I went along to a couple of sessions with the club as an introduction trying my best not to let on how intimidated I was!

I got back into the pool after setting a challenge between myself and my best friend to swim 12kms in a month and by the summer I was back in a wetsuit and diving into open water. I spent a lot of time in the waves as a kid so there’s always that feeling of nostalgia when I’m paddling around outside. The perks of growing up in the East :)

A few months later I was at Evans and buying my first road bike…that was a tough choice and an expensive one too! I remember my first long ride so vividly. I didn’t have a jersey yet so I didn’t have any pockets to hold food, tools etc. Nick (my other half) had told me that I needed to eat along the 75km cycle but I was adamant I could do it without food (idiot). I’m sure you can guess what happened after about 20kms….BONK. My cycling journey has been far from smooth, my legs are so scarred from falling over (especially when learning how to use cleats…), it took me a long time to feel comfortable in the saddle. The long rides at the weekend were riddled with both challenges and celebration, each time I came back I tried my best to not dwell on the mishaps (of which there were many…) and made a note of something I’d conquered. I also realised quite quickly that I could eat EVERYTHING I wanted to, the best part of the sport!

Even now I still feel that I’m learning, every time I get on my bike I’m better for it and it’s funny that something I was so fearful of a year ago has now become something I truly love. There’s nothing quite like zooming through the countryside with a few mates and stopping for the mandatory coffee and cake! 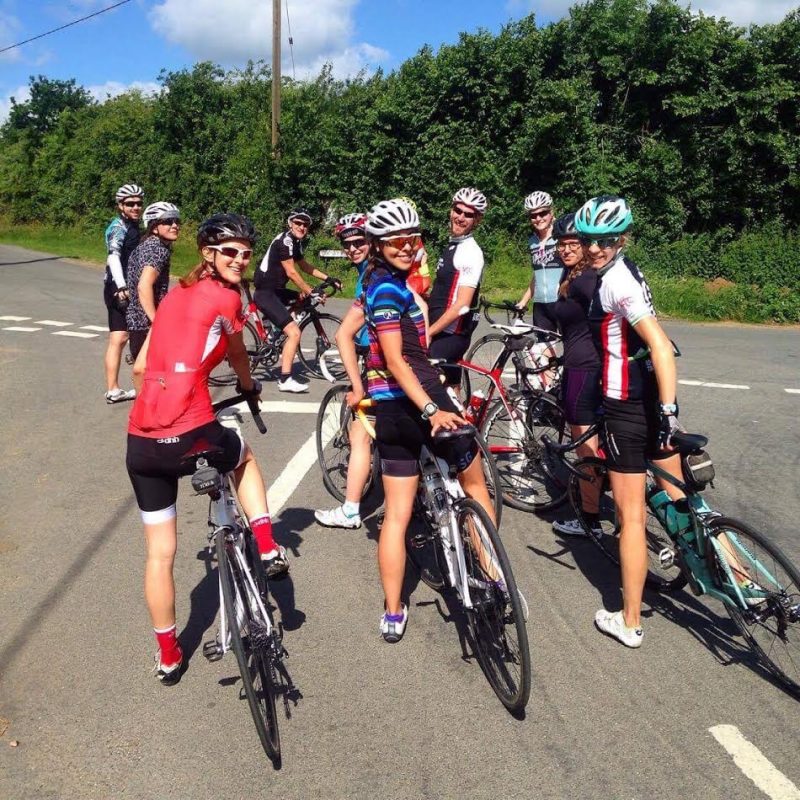 I love my Hypervelocity jersey!

I was all set to compete in 2016 but having upped my running volume and intensity I wound up with a stress fracture in my foot which put me off my feet for 16-weeks. I could still swim and cycle but could barely walk… It was the most bizarre injury, I went out for a run, heard something snap which I thought was a twig, carried on home as I didn’t feel anything and by the end of the day my foot was a monster and I was hobbling. That was when I learnt my most important lesson – to listen to my body. I caught a few of the races at the end of the season but took it as a sign to train smart for 2017 and that’s when Ironman 70.3 hit me.

It’s the race I’ve been training for since the beginning of the year and it’s just around the corner now! My workouts have changed so much from gym-class-bunny to 2hr watt bike sessions. If you’d told my younger self ten years ago what she’d be doing now she’d never have believed you and my friends will give me plenty of banter for that! I used to wear skirts and makeup, and now my wardrobe is chock-a-block full of sports kit, water bottles, hydration tabs…basically anything Triathlon 220 tells me to buy!

I’m not looking to be a pro athlete, I just enjoy what I do, race as best I can and be proud of what I achieve. This journey to triathlon has challenged me to do things I never thought I could, introduced me to so many new people and bankrupted me at least three times… I feel very blessed to be where I am, and do what I do, especially after giving up the corporate world to become a personal trainer. There is so much more still to come and I’m already planning our adventures for 2018 whilst keeping the engines ticking for an exciting few races ahead. For now, the training continues and so does all the fun that comes with it :) . If you haven’t got some stolen goat kit already, then make sure you do! I bought myself the Echappee Red Jersey and matching Bodyline One shorts and it’s great stuff, you won’t be disappointed! 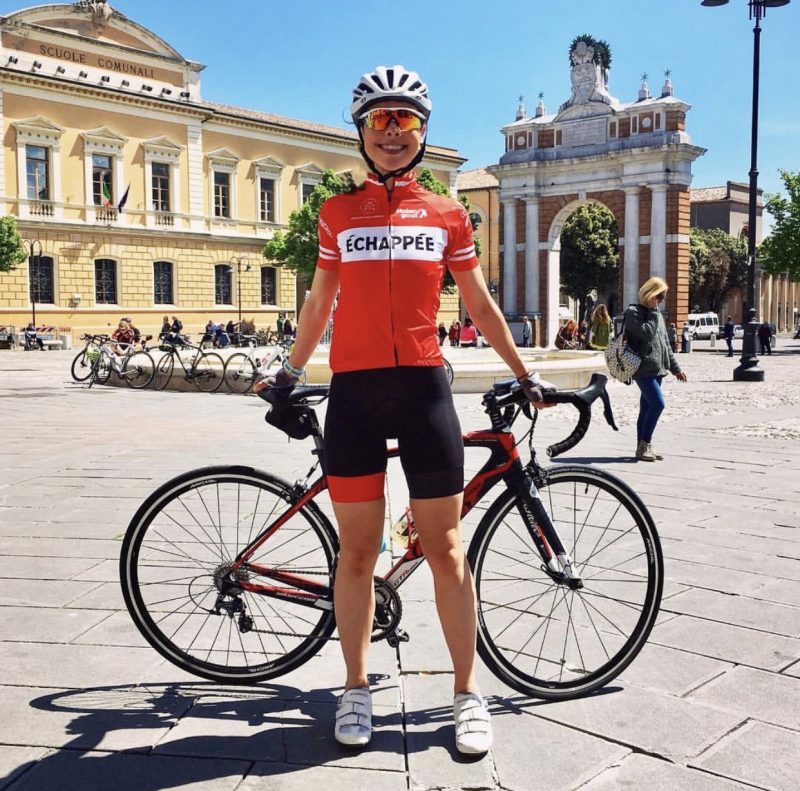 Follow me on my adventures through Instagram and keep checking back here on the blog to see what I get up to!

Get
Out
And
Train

More from the Blog

Azalea bushes are poisonous to goats. – As my grandpop used to say - if you don't know what it is, don't eat it. He's dead now.