After the defeat we experienced from not being able to find our first cache, it didn’t stop us! Gutted and not going to let that happen again, we spent our Thursday lunch break checking/double checking the coordinate, trying to pinpoint the cache on the map and reading comments from people who had previously found it. We also downloaded the Geocaching app for iPhone and subscribed to their premium service which allowed us to search the map offline. This was a massive help!

So, Friday came, we did a few hours work then got ready to go. Everyone bright eyed and determined, we set off!

It had rained the evening before which made the singletrack extremely boggy. Mud flew up in every direction from the tyres – we got absolutely caked! Nevertheless, we carried on ploughing through the slush and grinding hard up hill. Paul of Bike Swanky was slipping and sliding all over the place, superb control on his part as his bike is more of a road machine than an off-roader. We were really putting it through its paces by taking it through loamy, swampy terrain. I mustn’t forget the lethal roots and logs which lay on the track. Horrendous! Slippery was an understatement.

But…… we carried on!

Eventually, we arrived at a location that looked extremely familiar.  The Garmin had navigated us to this point on our previous venture and it couldn’t navigate us any further. This time we had the app! We opened the app and followed it’s instruction. It took us right, towards the pond. Last time we went off in the completely opposite direction……….oooops.

The app lead us around the pond to a group of Birch trees….. things were looking good! 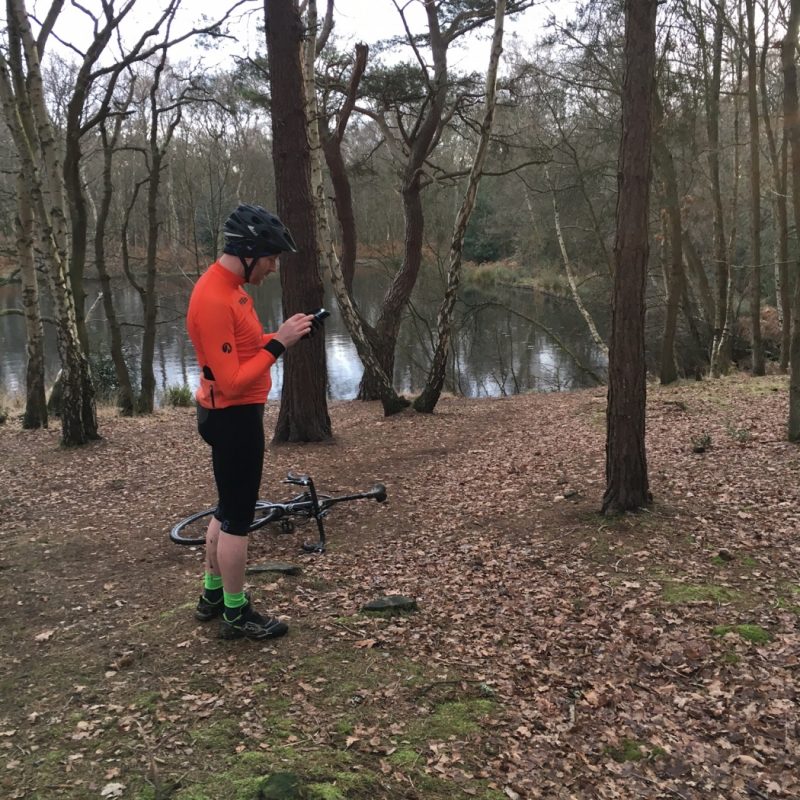 We dismounted and went on by foot. Andy, with his eyes glued to the map on screen, arrived at the base of a particular Birch Tree and explained it was here.

We had a look around it………. and right enough…….. there was something placed amongst some branches…….Could this be it? 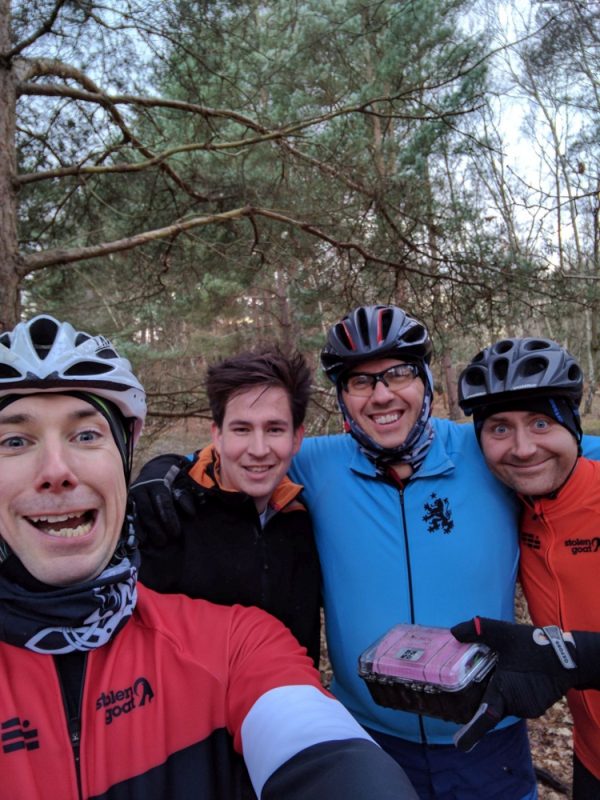 Yes! It was the geocache! Our first ever find! We were finally Geocaching experts!

So what was inside?

That, you will have to find out for yourself! Go out and find some caches, it’s great fun!

We signed the logbook – team SG was here – thank the lord there was a pen in the cache, we forgot ours!

Wanting to record this historic moment we needed photo evidence of the success! Who better for the job than our Creative Manager – Rob…… Oh wait! His phone had died…… again. Useless! This is the third time Rob has been beaten hahaha.

(fyi no goats were harmed in the making of this photo). 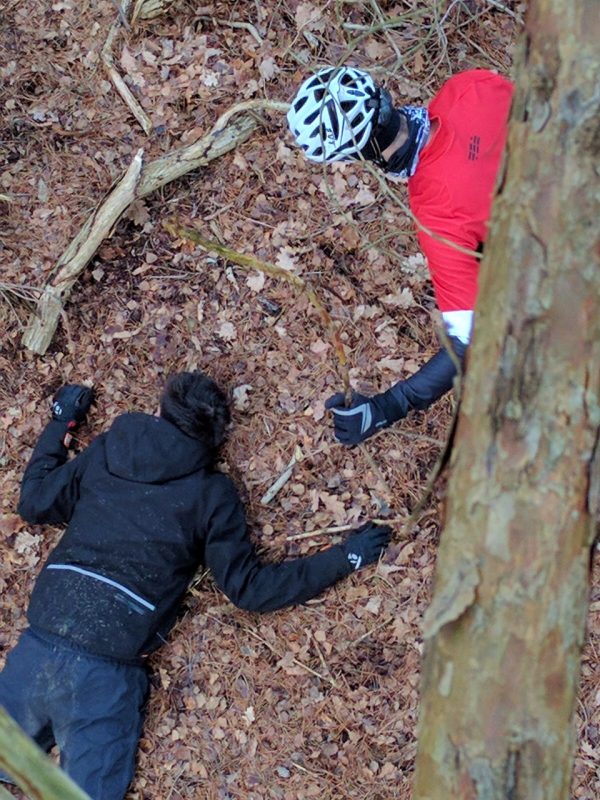 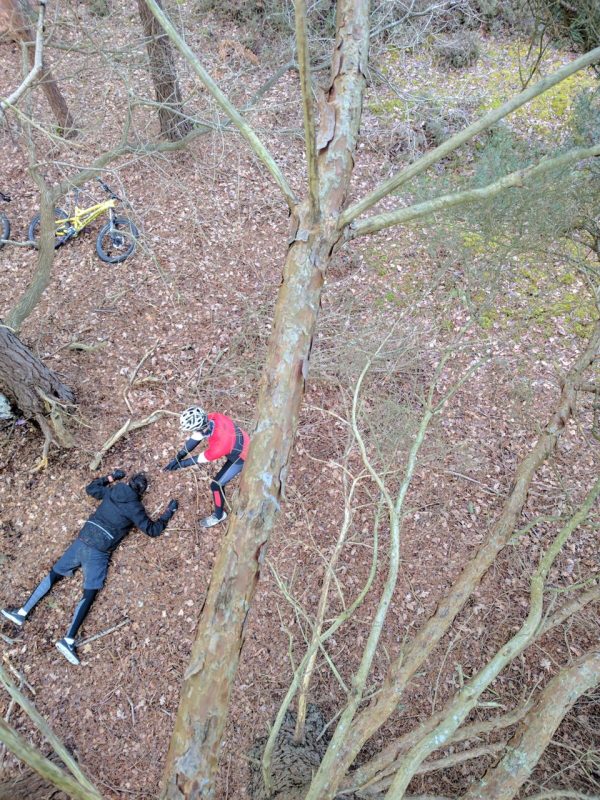 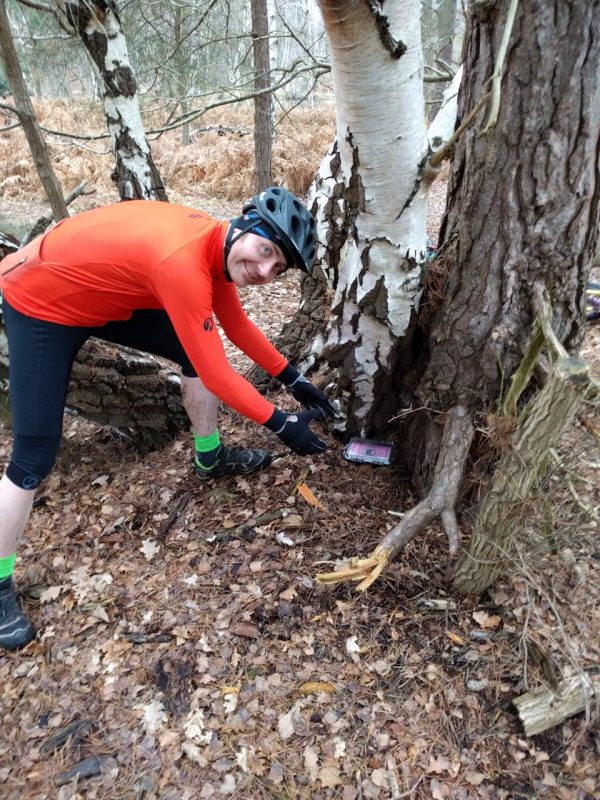 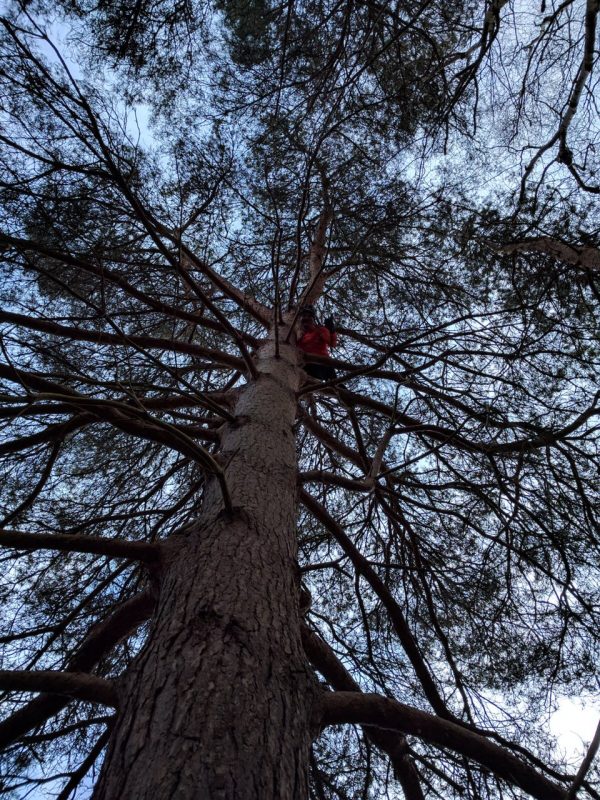 There are approximately 450 million goats around the world. – Who's counting? People should spend more time riding bikes than counting goats!